Photo Essay: "Breakfast at Brutus'" and Other Modern Renditions of Classic Films 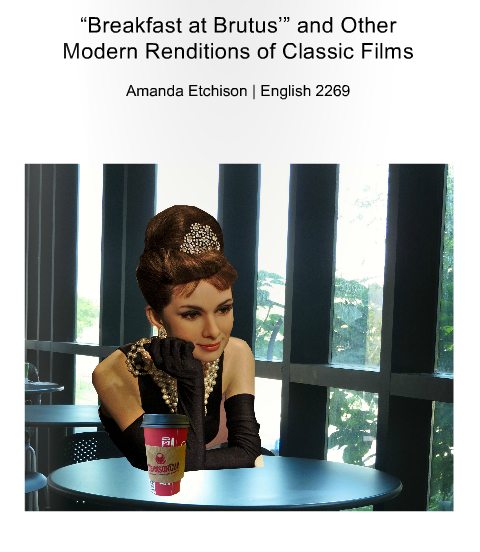 Certain images have a potency that, for better or for worse, cause them to remain with us long after we tear our eyes away from the canvas, computer monitor, or newspaper page. Whether these images haunt or inspire us, terrify us or give us hope, for some inexplicable reason, they have acquired the power to penetrate the emotional numbness we often feel toward the world around us.

What sets these specific images apart from the thousands of others that we see every day? Why do we remember some images better than others? Why are some images still prevalent in our culture today while others have faded into obscurity?

Approaching this photo essay assignment, I decided to delve further into the concept of persistence of image. By transplanting a selection of well-known images from a variety of classic movies into the modern-day surroundings of OSU’s campus, I hope to challenge my audience to consider the legacy of powerful images and icons, their persistence throughout changing times, and their continued cultural significance in our society today.
http://issuu.com/amandaetchison/docs/photo_essay_final_format/0

A Day in the Life Audio Story: "Don't Tread on Me" 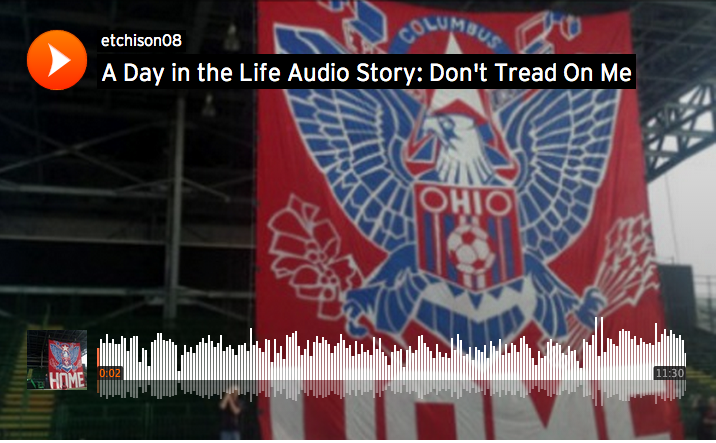 Passion is defined simply as “a strong feeling of enthusiasm or excitement for something or about doing something” by the Meriam-Webster online dictionary. However, anyone who has ever felt passionate about anything in his or her life—whether that passion is for music, athletics, or even sculpting corncob pipes—knows that a passion is so much more than just feeling strongly about something. A passion can be an intense motivator, a beacon of hope, or a cause that reaffirms a reason for living. A passion is something that is fostered through experience and nurtured through hard work and dedication. And sometimes, a passion is something that you would fight for and defend to your last breath.

But what happens when someone or something tries to discourage you from pursuing this passion? What would you do if the possibility of fulfilling your lifelong dream was suddenly no longer under your control?

This is exactly what my audio story is all about.

During the summer of 2013, a group of passionate soccer fans had gathered at Columbus Crew stadium to discuss an upcoming international match scheduled to occur in Columbus later that year. The supporter’s section was in disarray, led by inefficient leaders and distracted by group politics. Having had enough of the Nordecke supporters’ indecision, a small group of Columbus Crew SC supporters—an eclectic group of artists, designers and logistics-minded individuals—decided to take matters into their own hands. What they ultimately accomplished would change soccer support in America forever, but the road to glory was not an easy one.
https://soundcloud.com/etchison08/a-day-in-the-life-audio-story-dont-tread-on-me

Concept in 60 Video Project: Columbus in 60: The Sights of Our City

With each definitive ranking of United States cities published by national news organizations every year, from “Top Cities for Innovation” to “Most Intelligent Cities” and everything in between, it becomes clear that Columbus is in the midst of an important transition period.

Earlier this year, Columbus was ranked as the No. 1 “Opportunity City” in Forbes magazine’s list of “19 Places Where it May be Easier to Make Your Mark.”

The report states: “Columbus is home to a surprising number of major corporations whose employees represent a deep pool of potential customers… It also has a healthy pipeline of venture entrepreneurs.”

Other accolades awarded to Ohio’s capital city include a third place ranking on UBI Index’s list of “Top 10 University Associated Business Incubators in the World,” and No. 6 on Property Shark’s ranking of “Best U.S. Cities for Culture.”

As a student living, working and attending school in this growing metropolitan city, I can say that Columbus is not to be overlooked as a bustling epicenter of business innovation, artistic expression, and cultural exchange. Every day that I spend in Columbus, I am amazed by the overwhelming amount of opportunities offered here. It is this reformed view of Columbus that I hope to convey to my audience in my Concept in 60 project.


All of the videos included in this project were shot by me on my Canon SX280HS camera, and edited in iMovie. I wanted to include video that I shot myself, since this project is all about my interpretation of changing culture in Columbus. While out in the city filming, I hoped to capture snapshots of everyday life, a visual compilation of the vibrancy of life pulsing through this city’s veins.
https://www.youtube.com/watch?v=orG5rqt83-w&feature=youtu.be 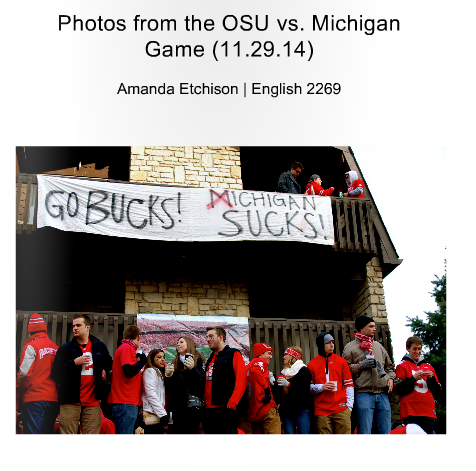 For my final open genre project, I decided to return to the first unit that we explored in this course—the photography unit. Having taken a digital photography course last year, this unit was by far the most comfortable and familiar to me.

This time, however, I wanted to challenge myself to shoot using a DSLR camera instead of my digital point and shoot. I saw this final project as an opportunity to get my feet wet in the world of photojournalism. As I know I have several multimedia journalism classes coming up in the remainder of my undergraduate career at Ohio State, I thought using this time to become better acquainted with professional photography equipment would be beneficial in the long run.

Up until this point, I have been using my Canon SX280HS camera, which is an advanced point and shoot camera. In this English 2269 class, I have used this camera for the first photography project and for our video project.

While I have been pleased with the images I have captured using this camera, I have always had the desire to learn how to use a more advanced DSLR camera. I recently acquired my grandfather’s Nikon D80 camera, which I used to take the photos seen in this final project.

It should be noted that the project I initially planned to present is much different than the one I ultimately produced. I originally wanted to try my hand at concert photography, as I already write primarily for Arts & Entertainment publications and I thought knowing how to shoot my own photos for shows and concerts would be a marketable skill to have.

Unforeseen issues regarding concert photo credentials arose throughout the weeks leading up the project, so I was forced to come up with a “Plan B.” I ultimately decided to document the Ohio State vs. Michigan pre-game experience.

Although the images included in this final project were not of the subjects that I initially planned on photographing, I think the experience still served a valuable educational purpose. The photographs I captured are more photojournalistic in nature than the other projects I have pursued in the past.

I think the differences in my approach to taking more documentary photographs can be best seen in the methodological and design choices that I made throughout my adventure into photojournalism.

Methodologically speaking, this experience of taking photos felt different. While I was wandering the perimeter of Ohio Stadium, the way I went about looking for subjects to photograph was much different than when I was taking photos for my first visual medium project.

While photographing this project, I was inspired to take small moments from the larger scene and capture them forever in a single image. Personally, I take pleasure in honing in on intimate interactions that are often lost by the sheer multitude of distractions in an environment.

Faced with a sea of red and gray-clad football fans, it was easy to be overwhelmed by the vibrancy of color standing out amongst a background of overcast skies. I knew that only taking photos of this crowd of people would not be as effective as highlighting the individuals that make up this mass gathering of humanity.

I often entertain myself by making up stories about the lives of people that I pass on the street, and I decided to expand upon this idea of the mystery of individuals’ lives in this photojournalism project.

This overarching idea did not only influence the methodological choices that I made while choosing the subjects to capture in these images—it also impacted the design choices I made while composing the image through the viewfinder, adjusting exposure settings, and determining exactly when to take the photo.

Since I was motivated by a drive to capture just a few precious seconds of passing strangers’ lives, I tried to shoot most of the images that featured a specific individual or group of people with a shallow depth of field. This can be best seen in the photo of the young child on the man’s shoulders and in the photo of the family standing outside of St. John’s Arena.

I think these two photos best represent my vision for this project. In reducing the chaotic background to blurred figures and shapes, it leaves the viewer with little choice but to ponder the life stories behind the subjects I chose to highlight in each photo.

Prior to setting out to photograph on Saturday morning, my rhetorical purpose in this project was not as clear as in other projects. I wanted to go out and shoot with little preconceptions as to what I wanted to convey in these photos, since I wanted to have the experience of capturing images as they happened—instead of creating perfectly composed situations in order to convey a specific idea.

I did know that my intended audience would be attendees at this gallery walk event, so it would most likely be people who have previously experienced the pre-game atmosphere of an OSU football game. This assumption further strengthened my resolve to go beyond basic crowd shots and search out a more personable approach to documenting this annual event.

As mentioned before, I think that sharing with my viewers a small portion of individuals’ lives evokes a sense of pathos—a desire to indulge in piecing together the life story of a subject from just one stolen moment in time.

In the case of the buckeye necklace photo or the OSU bus photo, I think that these photos highlight the minute details that are easily overlooked when one’s senses are bombarded by a cacophony of sounds and an oversaturation of images. By focusing on these subjects, this project portrays an entirely different view of a beloved college tradition.

Through this collection of images, I hope to personalize the experience of joining a crowd of hundreds of thousands of fans. I hope to provide my viewers with a few peaceful moments in the midst of a constantly bustling world, and encourage them to stop and look around for these intimate moments for themselves as they rejoin the rat race of everyday life.